By Alex on Dec 15, 2022
For being young on the beer scene, Florida is catching up real quick! Our first microbrewery, Dunedin Brewery(opens in a new tab), didn’t open until 1997. Since then, over 350 more have sprung up all around the Sunshine State. Tampa is currently the epicenter of Florida brewing, with almost 30 breweries and brewpubs and more scheduled to open! Great breweries are everywhere now. From Pensacola Bay Brewing(opens in a new tab) to The Waterfront Brewery(opens in a new tab) in Key West and everything in between. Make sure to check out all the amazing breweries in St. Augustine, and we added a few in the surrounding area that are worth a short drive. If you are visiting during the holiday season and Nights of Lights, make sure to ask the first brewery you visit about the Nights of Pints(opens in a new tab)! 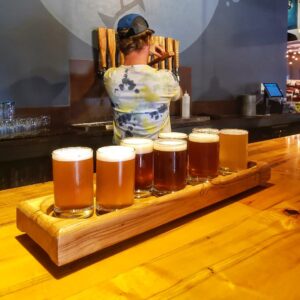 Dog Rose Brewing(opens in a new tab)
A short walk from the central Plaza in historic Lincolnville, Dog Rose is a place you will find yourself coming back to over and over. At just 5 years old this place has developed a loyal following by both beer and music lovers. They have a great selection of flagship and rotating beers that spans pale to dark malts. They just started canning a select amount of beers, so if you like something check with the bartender to see if it’s available to-go. Every weekend music lovers come to hear jam bands, rock, or bluegrass concerts right in the taproom. They change up the food trucks out back on the patio each weekend, but you can also bring in food from any of the amazing restaurants around St. Augustine. Dog Rose is a featured stop on our Ale Trail Craft Beer Tour where we discuss the brewing process and awesome beer history.

Ancient City Brewing(opens in a new tab) (2 locations)
St. Augustine’s first production brewery, you will find these guys on tap at bars and restaurants all over North Florida these days! We love that they can all 6 of their flagship beers so we can bring Ancient City Brewing with us while golfing, fishing, or to the next party we get invited to. Don’t miss their Recipe Blog with tips on how to use Ancient City beer in different cooking dishes and cocktails. Their original location and brewhouse is located off Route 16 near 95, and their downtown taproom is right on our central Plaza, just a few doors down from the Cathedral. The brewhouse hosts an awesome variety of fundraisers, trivia, and poker nights. On weekends, the downtown taproom has a mixture of live music and live art events during the First Friday Art Walk(opens in a new tab). Cans can be bought to go at either location, so if you’re staying at a hotel or Airbnb downtown this is very convenient for you! Ancient City is an important stop on our Ale Trail Craft Beer Tour where we discuss the impacts the beer industry has had on St. Augustine.
Old Coast Ales(opens in a new tab) 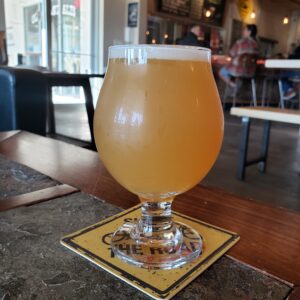 Like many other great breweries, Old Coast Ales started in a 10 gallon pot in a garage. You can’t visit Anastasia Island these days without a trip to Old Coast Ales. Our one local brewery holding down the island (for now), you can easily walk there from downtown if you don’t want to move your car. Only a 15 minute walk from our central Plaza, you will have an awesome selection of world class IPA’s, blondes, malty porters, reds, and any other awesome creations the brewers might be thinking up. A comfortable and relaxing taproom with 2 separate outdoor spaces gives you plenty of seating choices, and feel free to go right next door and grab a few Osprey Tacos(opens in a new tab) to bring back and pair with your brew.
Bog Brewing(opens in a new tab) 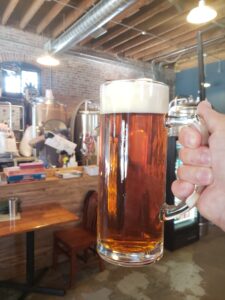 We love Bog Brewing because they are always pushing our palettes to new heights making some of the funkiest beers in town. Located in the Historic West King Street District, just across US 1 from downtown, be ready to stay for a while because you will want to try everything! The draft list features seasonally influenced Belgian, German and American-Farmhouse style ales. Head Brewer and Co-Owner Steve leverages his years of experience in the craft beer scene as well as his travels overseas to inform and inspire the beers he creates. Visitors can enjoy a unique selection of seasonal beers, like the Smoked Datil Ale, brewed with locally sourced hot peppers, or the Saison Blanc, a saison aged in Sauvignon Blanc barrels for 11 months. Make sure to pop out back and visit another local favorite, the Tacos My Blessing(opens in a new tab) food truck!
Just outside of St. Augustine….
Mocama Beer Company (Amelia Island)
No trip to Amelia Island is complete without a stop at Mocama Beer Company. Just down the road from historic Fernandina Beach, they spared no expense converting an old 50’s car garage into a beautiful, 3,500 sq ft taproom. One of the most gorgeous we’ve visited in the state of Florida. Brew seekers will be in heaven tasting from 24 taps in a tactile space that carries sophistication and feels good, but with zero pretentiousness – just enjoyment.
Ruby Beach Brewing (Jacksonville)
The Ruby Beach team are passionate about crafting unique and inspired craft beers using locally sourced ingredients. The goal is to continue to brew beers for the discerning beer connoisseur. From sours to barrel aged stouts and everything in between, they proudly represent the Jacksonville craft beer movement.
Intuition Ale Works (Jacksonville)
Since opening in 2010, Intuition has become one of the fastest growing brands of craft beer in Northeast Florida. You will find Intuition brews on tap from St. Augustine, to Orlando, over in Tampa, and back up to Tallahassee! They are open at 10 a.m. for every Jaguars home game! Guests are welcome to pregame with their 21 taps and awesome gameday food menu.
Azalea City(opens in a new tab) (Palatka)
If you head to Palatka don’t miss this newie-but-a-goodie! You can stop in to Azalea City Brewing Company for a break while biking on the Palatka-to-St. Augustine or Palatka-to-Lake Butler trails, kayaking or fishing on the Ocklawaha River or Dunns Creek, or hiking in Etoniah State Forest or Ravine Gardens State Park.
Veterans United(opens in a new tab) (Jacksonville)

Ron, a former Naval Flight Officer, organized a motley group of military veterans sharing an enthusiastic desire for producing and enjoying premium craft beer and formed Veterans United Craft Brewery in 2013. They are proud to count themselves as one of the largest microbreweries headquartered in Jacksonville, and the first packaging operation on the Southside.

There are so many great beers here, but we get most excited about the incredible sour beer collection they are creating! Hourglass Brewing is a family-owned, award-winning craft brewery in Central Florida. Established in 2012, Hourglass contributes to the community by not only providing a wide selection of beers that caters to any palate, but by working with local businesses, and even local bands, in order to lift up our home town. If there is a specific flavor they want present in one of our beers, they will search high and low to figure out how to make it work using only natural ingredients. From sourcing hops and barley, to filtering the water through our in-house reverse osmosis system, the Hourglass team controls every element of their beer brewing process, laying the foundation for the cleanest, most refreshing taste possible.

Break Your Score, Not Your Bank Previous Article Where to drink Coffee in St. Augustine Next Article

Where to drink Cocktails in St. Augustine